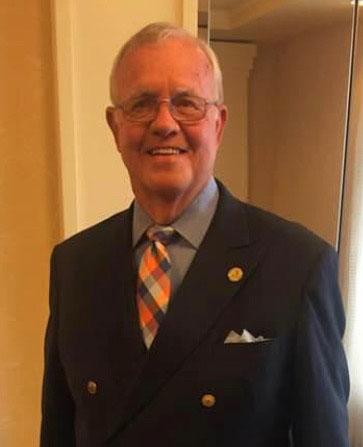 It was sad news for the City of Brewton on Monday, Jan. 20, 2020 when long-time former mayor, Ted Jennings passed away while on vacation in Georgia. He was born in Brewton on Aug. 29, 1944 and was a lifelong  resident of Brewton. He is survived by his wife, Susan, and his children, Steve, Phillip, David, Molly, Dylan and Krystal. Funeral arrangements are pending at this time. He graduated from T.R. Miller High School in 1961 and from Auburn University in 1965.

Jennings served as the leader of Brewton for 24 years from 1988 to 2012 ending his career at city hall after four terms.

He not only served the city as mayor, but he worked with his dad in the family owned pharmacy several years before taking a position as a pharmacist at D.W. McMillan Hospital.

Phillip Parker, co-pharmacist and former CEO of the hospital said that Jennings did an outstanding job in both of his occupations.

“He did a lot for the city,” he said of Jennings. “I hope we can give credit to all he has done for the city and he deserved a lot. I can’t say enough about him and the things he has done for Brewton, not only as the mayor, but as a smart businessman who was known across the state and even the country. He will be missed.”

In January of 1986 he was appointed to fill the city council seat left by the death of Leon Brooks Hines in December of 1985. He gave up that position to run for mayor in August of 1988. He won the election and served the City of Brewton well for the next 24 years.

Upon his retirement as mayor in 2012, Senator Jeff Sessions spoke of Jennings entered on July 19, 2012 in the Congressional Record.

“During that time, he has grown Brewton both economically and technologically. But in addition to his success as a mayor, he has been a successful business owner and pharmacist. He is also well known in Alabama as former president, and an active Officer Of the Alabama League of Municipalities and nationally has served on the board and in many other positions in the National League of Cities. He has, in both capacities, represented Brewton and Alabama as a strong advocate on matters of economic development. All of us who have come to know him over the years have observed his dedication to public service, his hard work, and his effective leadership.

Jennings has worked with a number of people over the years who remember him as being approachable and caring with the city workers who knew him well. One of those was John Angel, who served as city clerk.

“He was an outstanding person to work with,” Angel said. “He was a smart businessman and mayor. He was not in politics before he was appointed to a seat in the city council but he was a natural.”

Steve Yuhauz also served for more than six years as the city clerk. He said he admired Jennings very much.

When Jennings announced his retirement, Congressman Jo Bonner spoke in the House of Representatives about his having served almost a quarter of a century as the Mayor of Brewton.

“For many, this accomplishment alone would be the epitome of a life’s work. But Ted’s body of accomplishments does not begin nor end with holding public office,” Bonner said.

A graduate of Auburn University’s School of Pharmacy, a successful business owner and Director of Pharmacy at D.W. McMillan Memorial Hospital, Mayor Jennings has also made an indelible mark through his compassion and devotion to the well-being of his community.

And his contributions don’t stop there. While Ted Jennings may be known to the people of Brewton as their long-time mayor and trusted pharmacist, to his colleagues in Alabama and across America, he is an indispensable resource of wisdom and experience. A former member of the board of the National League of Cities, Mayor Jennings has held about every post one can within that important national organization, tirelessly defending the principles of good government at forums around the country. In Alabama, Mayor Jennings has also led his peers as president and long-time officer in the Alabama League of Municipalities where he has been a strong, steady voice for issues vital to local and state economic development.

A man gifted with a vision for our nation’s—and region’s—economic future, Mayor Jennings has for decades promoted the development of telecommunications on the local and state level, leveraging the resources of businesses and universities. A supporter of both electronics and paved highways, Mayor Jennings also helped establish the Florida-Alabama Strategic Task Force to improve transportation between the two states to enhance both public safety and economic growth.

“I have had the pleasure of working with Mayor Jennings for more than two decades and I can say, without hesitation, that his devotion to public service is without equal,” he added. “I was fortunate to be a co–chair on the Alabama Rural Action Committee with Mayor Jennings, and I believe there is a no more passionate and informed voice for rural economic development than his.”