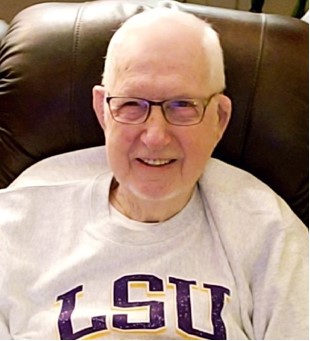 Joe was born in 1934 in Brewton, AL to the late Henry E.  White and the late Bertha Jones Carroll. He graduated from T.R. Miller High School in 1953 and was part of the 1952 State High School Basketball Championship team.  He was an Alabama All-State basketball and football player who played college basketball at Louisiana State University.

In addition to his parents, Joe was preceded in death by brothers Charles Carroll, Dr. Edward L. White, and Irwin E. “Bill” Westheimer; a sister, Maude Burge; as well as his legal guardians Mattie and Henry Ryles.

He is survived by his beloved wife of 44 years, Barbara Goode White; his children Joe M. White, Jr. (Kelly) and their children Mattie Sharkey (Kearan) of Olympia, Wash.;  Riley, Noah, Karaghan, and Samuel of Conowingo, Md.; Kimberly White Lasater (Tom) and their children, Thomas, Rebekah, William, Jacob, and Bennett of Broadway, N.C.; Jill Gregory Nedwick and children, Emily of Macon, Ga; Sarah, Luke and Conner of Ellington, Conn.;  Daniel E. White (Sarah) and their daughter, Thea Elizabeth of Blacksburg, Va and one great grandchild, Sawyer of Olympia, Wash.; cousin, Edna Bryars and many special cousins, nieces, and nephews who he took great care to visit no matter where located.

Joe was a veteran who honorably served his country in the United States Army.  Upon completion of his service, he relocated to Dover, Delaware where he worked in the automobile business until his retirement at which time he and his wife Barbara moved to Virginia Beach. Joe participated in city league basketball and tournament tennis until his 60’s.  After his retirement, he and his wife became avid hikers. They hiked the Inca Trail in the Peruvian Andes, rode the Orient Express train to Machu Picchu for days of hiking, hiked the jungles of the Yucatan Peninsula to explore Mayan ruins and swam in a cirque, hiked the ice fields of the Canadian Rockies to explore glaciers, and hiked the eastern coast of Maine and Canada for whale watching.  They also hiked and explored almost all of the national parks and monuments in the American west and southwest. They spent one anniversary sitting on top of Cadillac Mountain in Maine so that the first rays of the sun to hit the United States that day hit them first, another anniversary drinking champagne during a windy blizzard atop Pikes Peak, and another sitting in rocking chairs on the porch of the lodge at Crater Lake because all the trails were covered in over 5 feet of snow.  In between times, Joe was racing around on his boat pulling kids and grandkids on skis and tubes. Joe was 85 years old and lived a full and wonderful life. His family misses him.

A memorial service and interment will be held July 2, at the Albert G. Horton, Jr. Memorial Veterans Cemetery in Suffolk, Va.