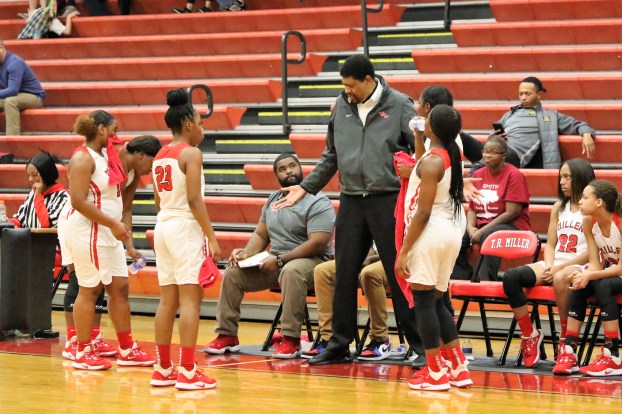 Above, Coach Ron Jackson instructs the girls during a time-out taken in the subregional game at home last week. Standard photo/Allison Terrell

The T.R. Miller ladies avenged last year’s loss to Prattville Christian with a 54-46 win in the regional semifinals at Alabama State University’s Acadome.

“We’re just trying to do what we do,” said head coach Ronald Jackson. “We got by them. They beat us last year in the regional finals. This year we were able to get them. They have a good program.”

TRM moved to a 22-15 lead after one quarter and never trailed.

“This was a chance for us to play the team that put us out last year,” said Jackson. “They’re well-coached and its was a battle the whole game. We led the entire game but it was like two or three points. We kinda pulled away a little bit at the end.”

The Lady Tigers turned to defense, led by Vanessa Samuel, to turn away Prattville Christian.

“They had a couple of players who could really shoot the ball well,” Jackson said. “We had to do what we did defensively to keep them under control. The kids went out and literally gave it 110%. They knew they had a job to do. They knew we were playing a tough team that was going to be hard to beat. But they are a year older now from the team that lost to PCA last year.

“Vanessa Samuel did a heckuva job on their leading scorer. She put some excellent defense on her.”

TRM is now one win away from the Final Four and will play Hale County at 12:30 pm in the Acadome Thursday.

Coastal Ala. rallies for 7-5 win over CA-East

By: Jim DeWitt Central Alabama came from behind Thursday, Feb. 13, for a 7-5 win over Coastal Alabama-East in the... read more