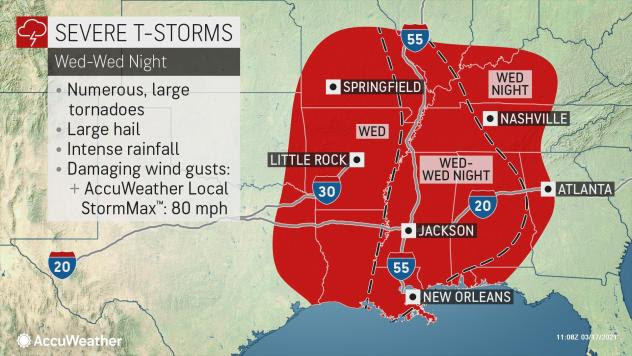 According to AccuWeather reports, Alabama sits largely in an area of concern for severe weather beginning this afternoon and continuing through the evening hours. Forecasts indicate that the Brewton area is included in the area of concern through early Thursday morning.

The storm event headed to the area is expected to affect millions of Americans in the effected areas from Texas and Oklahoma eastward through Alabama, Georgia and the Carolinas.

Even outside of tornadoes, forecasters say wind gusts of 70 mph can occur in the strongest storms during on Thursday. Gusts could be even stronger, with  80 mph expected in storms on Wednesday and Wednesday night.

All facets of severe weather ranging from large hail and flash flooding to damaging straight-line wind gusts and tornadoes can occur from Wednesday through Thursday evening in what is likely to evolve into a significant severe thunderstorm and tornado outbreak.

“I think the highest tornado threat is going to be Wednesday and Thursday, especially on Wednesday afternoon and Wednesday night,” AccuWeather Chief On-Air Meteorologist Bernie Rayno said, adding that in addition to unleashing all modes of severe weather, there’s another aspect about this outbreak that has meteorologists particularly concerned: “Severe weather will be lingering long after sunset over the next few nights.”

The first tornado watches on Wednesday stretched across central Arkansas, northern Mississippi and southwestern Tennessee and expected to preceed the storms into Alabama later today.