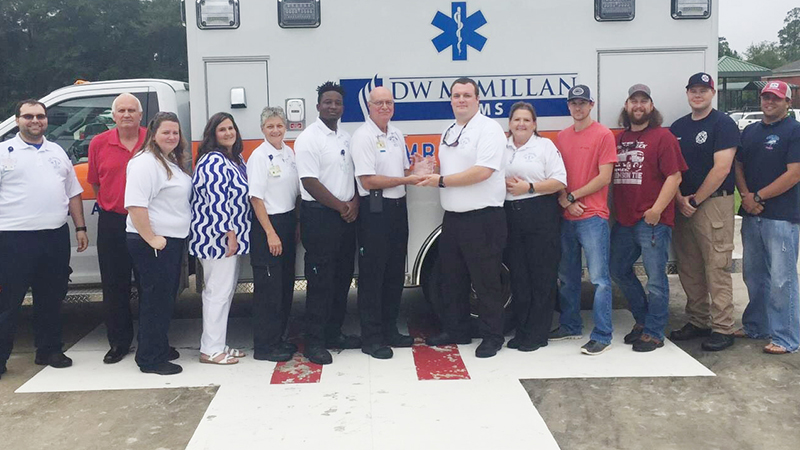 Mike Parker (center) recently celebrated his retirement from the D.W. McMillan Hospital EMS service. Here, his coworkers present him with a token of their affection. Courtesy photo

One career is not enough for some people. This seems to be more truthful today than it was even a few years ago.

Mike Parker began his working years as a middle school teacher and recently retired from his second career with the D.W. McMillan Hospital EMS.

Working with the EMS was not his first choice of career. He was born and raised in East Brewton and graduated from W.S. Neal High School in 1968. He then attended Jefferson Davis Junior College for two years before earning his degree in education from Livingston.

“My mother was a school teacher,” Parker said. “I just sort of gravitated toward doing the same thing. I came back home to East Brewton and taught the fifth and sixth grades at Neal in math and history. This was when the school was located where the careertech school is today.”

In 1976 he shifted over to the high school for a while and taught several different subjects for about six years before returning to the middle school about 1982. He continued his career in education and in 1993 he became principal of the W.S. Neal Middle School and retired in 1997.

He did take a course, which led to others and in 1982 he began to work more hours when the hospital took over the EMS. He began to work more and more for the EMS Unit and when he retired in 1997 from the school, he continued working at the ambulance service full time.

“David Blair called me one day and asked me if I wanted to work more hours,” Parker said. “I had a lot of stressful hours between the work I was doing at the school and at EMS. When I retired from the school, a lot of that stress was relieved and I was ready for full time.”

Parker has now retired from his second career, but hasn’t had the time to enjoy it yet.

“I had a long list of things waiting on me to have the time to do them,” he said. “I retired in August and have been working ever since, but I have about caught up with things and hope to begin to enjoy the time off. I have a great wife and she has been with me through all these changes over the years.”

Parker met his wife, Dianne, in church and they were married in 1988. She was recently retired from D.W. McMillan where she was employed with the business office.

The couple has two daughters; Teri is the office manager at the Brewton Country Club and Lauren is a registered nurse at Sacred Heart Hospital in Pensacola. She also works part time in D.W. McMillan Hospital.

Although they have no grandchildren, the Parkers do have a couple of “grand dogs” who are big parts of their lives.